This historical reconstruction project was just completed in 2020. The original bridge over the Maiden Creek in Lenhartsville, Pennsylvania, had been built in 1869, but had been closed to all traffic for several years. Lancaster County Timber Frames disassembled the bridge and transported all of the original timbers to its facility in York, PA in September 2019. There, over the course of several months, we rehabilitated most of the existing timbers and replaced the rest.

The bridge walls with their Burr arch components were fully assembled at our shop, then disassembled again and trucked to the job-site, where they were again assembled and lifted into position on the new abutments and steel roadway substructure. Television crews and local newspapers were on hand to document the process of the original disassembly, and, of course, the final reassembly on site. A small ceremony and ribbon cutting, with a covered bridge historian and local and state dignitaries, was conducted on August 21st, 2020, more than a year after the start of bridge rehab work. The Dreibelbis Bridge project marks Lancaster County Timber Frames’ 10th covered bridge rehab project.

The Dreibelbis Station Covered Bridge was listed on the National Register of Historic Places in 1981. It is one of only a few remaining covered bridges in Berks County, Pennsylvania, and, at 175 feet free span, one of the longest single-span covered bridges in the United States. 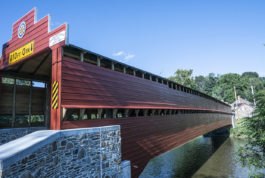 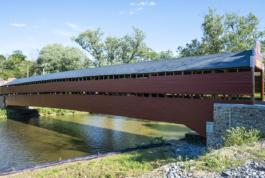 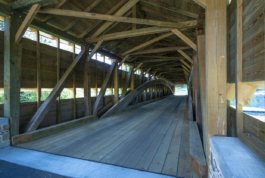 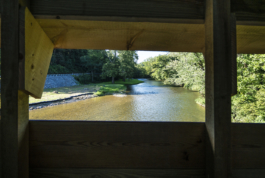 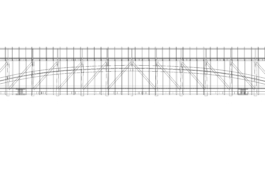 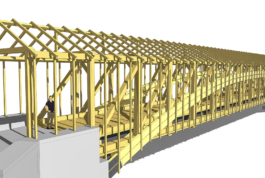